A close friend of mine is the incredible mother of an equally incredible three year old boy. This sweet child, “Chase,” has battled more medical demons in only thirty-six months than many adults have in their entire lifetimes. Chase had bilateral ischemic strokes in utero. These strokes left him with significant injury on both sides of his brain, which resulted in hemiplegic cerebral palsy, meaning he has weakness on one side of his body. He wears a brace on his right leg, a brace on his right arm, has considerable weakness in his trunk, and at three, he is not yet verbal. But, man, is this kid something. His gait and balance are getting better every day, even though they are not yet on par with his “typically developing” peers. The development of his fine motor skills is nothing short of extraordinary. And his non-verbal communication leaves many kids his age in the dust. This kid is not just a fighter, but a hero. He is a role model for all of us.

I remember a conversation my friend and I shared a while back about an experience she and Chase had at the park. When they arrived, other kids on the playground stopped playing and stared at Chase. One little girl began to open her mouth, perhaps to inquire about Chase’s physical differences, possibly to ask why he needed to wear the brace and wrist supports. But this child’s mother quickly shushed her and shooed her away, halting any conversation that may have been exchanged and thus extinguishing the girl’s natural curiosity. My friend felt shunned and hurt. She was overcome with disappointment that this parent portrayed to her own daughter that another person’s physical handicaps were not something to speak about.

That, right there, is a problem.

Not only does such suppression put an unreasonable damper on important discourse, but it sets children up to fear differences in others. It creates an injurious disparity between typical and non-typical peers.

One of the most significant ways we can prevent those with unique abilities from being stigmatized is to open the doors to discussion and conversation. Kids need to ask these hard questions—their curiosity is not just acceptable, but should be encouraged. It is up to us, the parents, to show our children that though we may all face different challenges, these challenges and unique attributes are not walls that separate. Instead, they should be scaled and celebrated, enabling all children—all people—to see that despite our physical or mental differences, we all share the same beating heart and desire for inclusion, love and acceptance underneath. This is the goal.

There are books for this, of course. There are books that nurture empathy by fostering emotional intelligence in our children, placing them squarely in the “other” worlds of fictional characters—characters whose unique abilities will come to be admired when children see that despite their perceived differences, they nonetheless share similar yearnings, fears and desires. While I do believe there is a dearth of fiction picture books tackling some of these tough topics, some recent non-fiction picture books, coupled with phenomenal chapter and middle grade novels, have set the bar for children’s literature tackling the topic of children with unique abilities. Picture books such as Six Dots: A Story of Young Louis Braille and Emmanuel’s Dream: The True Story of Emmanuel Ofoso Yeboah. Chapter books such as El Deafo, Wonder and Out of My Mind. Get these books. Make these stories—and discussions about them—a part of your child’s everyday world.

When my friend relayed her experience to me, she was crushed. Why? Because the people she encountered at the park were blinded by Chase’s differences and were unable to see him for what he truly is: a hero. A hero who has been thrown some tough obstacles, but who has conquered them with bravery, courage, and a heck of a lot of heart. His story is one that should be heard and celebrated by kids. Having conversations when our children are young—encouraging children to engage with peers who may be different than they are and to read books where characters may be afflicted with physical or mental challenges—will not just nurture empathy, but will also allow children to see beyond the braces. Only then will they be able to recognize the hero that lies underneath.

Young, clever Louis Braille lost his sight at five years old, which was tragic for numerous reasons, but especially considering he wanted nothing more than to read. So Louis set out to do just that, refusing to let his lack of sight get in his way. While only a child, Louis invented an entirely new alphabet that could be utilized by the blind and revolved around the sense of touch—using the tips of one’s fingers to read words and stories. This book celebrates Braille’s ingenuity and his accomplishments as a young inventor. It is a beautiful and important non-fiction biography emphasizing the importance of courage, innovation and determination when the odds are stacked against you.

Eleven year old Melody was born with cerebral palsy and has spent her life confined to a wheelchair. While her physical functions are limited, her brain function is far from it. Melody is not just smart, she is brilliant. Yet, most people are unaware of her intellect and view Melody only as the handicapped girl in the wheelchair. When Melody is finally able to “speak” for the first time, many are shocked that she is truly just like everybody else—and some have a difficult time grasping that. Out of My Mind is a moving portrait of a child with crippling physical limitations and a beautiful story of inner strength.

The team at All The Wonders is proud to spearhead the #BooksForBetter initiative, whose goal is to give families and teachers a resource to find great read aloud books that celebrate diversity, compassion and inclusiveness. We envision a movement that will grow well beyond our efforts, but we’re getting it started with a monthly Twitter chat and Instagram campaign.

Join us the first Monday of each month at 8pm EST for an #ATWchat about children’s books that showcase the human potential for goodness. Then post your favorite books on this topic on social media under the hashtag #booksforbetter. We’ll be compiling and sharing your ideas each month, making it simple for every family to find #booksforbetter. 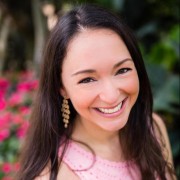 Lauren Davis lives in Miami with her husband and two young boys. By day she is a retired attorney turned library media specialist and by night she is an aspiring writer, avid reader, and blogger. Lauren has a not-so-secret obsession with books of all kind, and her greatest joy is watching her kids fall in love with magical stories. Lauren shares children's literature reviews and other bookish fun on Instagram @Happily.Ever.Elephants and Twitter @KidLitLauren. You can also find her at her blog, www.happilyeverelephants.com.

Books for Better: Kids with Unique Abilities – All The Wonders