Poised as we are now at the end of February, with Black History Month giving way to Women’s History Month, the time is ideal to read and share Two Friends (Scholastic, January 2016.) With restrained prose and exuberant art, Two Friends draws parallels between the lives of Susan B. Anthony and Frederick Douglass. Written by Dean Robbins and illustrated by the husband and wife team Sean Qualls and Selina Alko, this book strikes just the right balance of informational and inspirational. It serves as a bridge connecting the struggles of women and black Americans to achieve equal rights under the law.

On the surface, Two Friends tells the story of a visit between Susan B. Anthony and Frederick Douglass in Rochester, NY in the mid-1800’s. The two had tea and cake, and talked about many things. As friends do.

The title page, emblazoned with two lit candles from the table where Anthony and Douglass sat, gives readers the first glimpse into the deeper underlying themes of the book. Just as the circles of candlelight overlap in the picture, so did the efforts of these two brave champions for equal rights.

Anthony and Douglass were indeed bright lights in our country’s history, and the back matter and bibliography encourage readers to explore further. Both activists believed that “right is of no sex, truth is of no color,” a viewpoint grown no less topical these many years later.

As a child, Anthony wasn’t allowed to learn the same things as the boys. Her mother wasn’t allowed to own property or to vote. “Susan wanted something more,” author Robbins tells us. “She read about rights in the United States. The right to live free. The right to vote. Some people had rights, while others had none. Why shouldn’t she have them, too?”

Pages later, we learn that Frederick Douglass was born a slave and learned to read and write in secret. He, too, read about rights in the United States. “Why shouldn’t he have them, too?”

Characters are depicted in period clothing and settings, lending authenticity and interest. The element that truly elevates the illustration is the use of textual art. Handwritten and vintage typography with quotations from the Constitution, Douglass’ speeches and newspapers, and Anthony’s words adds magic and meaning to every page.

Frederick Douglass once said, “It is easier to build strong children than to repair broken men.” Two Friends is the kind of book that helps build those strong children: children with compassion, children able to see the inner similarities between people outwardly different, children who realize that doing what is right can be a long, hard struggle.

For more books that build strong children, be sure to visit our lists of 35 Picture Books for Young Activists and 20 Books About the Refugee and Immigrant Experience. You can also find more books featuring inspirational women on the Amelia Bloomer list, which curates a selection of notable feminist literature for children and teens.

Scholastic has created a beautiful Reader’s Guide poster, full of curriculum connections, activities, and discussion topics, plus more information about the book’s creators. A pdf version is available here.

Purchase Two Friends for your reader or readers. 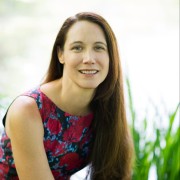 Katey Howes is a children's author, literacy advocate, and fun mother. Her books include BE A MAKER (Carolrhoda, 2019), MAGNOLIA MUDD AND THE SUPER JUMPTASTIC LAUNCHER DELUXE, and GRANDMOTHER THORN. When not writing picture books, Katey presents at writing conferences and contributes content to parenting, STEAM and literacy websites. You can find Katey on Twitter @kateywrites or on IG @kidlitlove.

Two Friends: A Picture Book of Tea, Truth, and Equal Rights – All The Wonders